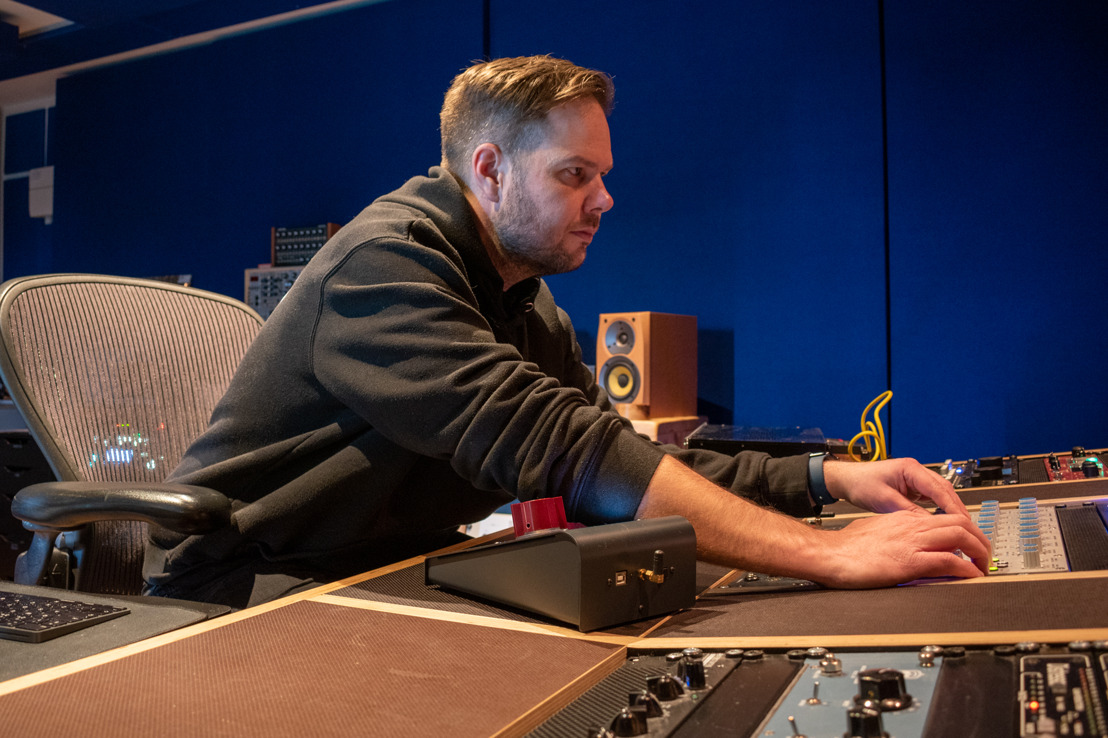 The New Forest, United Kingdom, December 12, 2022- Like many who have worked their way into the music industry’s call list as a mix engineer, Geoff Swan came to explore the art of audio from humble beginnings. “I started off just recording and producing local bands, learning the ropes on the fly,” he says. In the ensuing years, he built and worked out of several different studios, each time acquiring new knowledge, at times through trial and error. “I made lots of mistakes doing everything myself, often spending a lot of money where I didn’t necessarily have to,” he says. “But I learned little things here and there from mentors and made improvements each time.” After a four-year stint as an assistant to acclaimed mix engineer Spike Stentz that wrapped in 2017, Swan built a brand new studio in his home in The New Forest on the south coast of England, incorporating a powerful DAW-based system as well as a selection of trusted outboard hardware. His setup includes the Flock Audio PATCH, which helps marry the analog and digital worlds quickly and reliably as he works with artists like Charli XCX, Yungblud, and Caroline Polachek.

Swan wanted to combine everything he had learned in his career to create a workspace at his new home in The New Forest that was conducive to delivering high-quality mixes quickly.. “We built my mix room there from the ground up,” he says. “I wanted to see what kind of sound treatment and soundproofing I could achieve in a timber-frame building, and I'm happy to say it's the best sounding room I’ve ever worked in.” Even in reimagining his work environment, hardware remained essential to his vision. “I like to get tactile with music,” he says. “Sitting there holding a mouse and moving faders and knobs on a plug-in is great, but the more that I can get hands-on with the music the faster the mix process goes and the happier I am with it. There is something magical with hardware that adds another dimension to the sound for me.” But like the acoustic properties of his space, Swan sought to simplify and streamline his workflow with respect to outboard routing. “The demands of the industry haven’t changed much over the years in terms of the expectation of quality, but the demands in terms of turnaround time are very different from what they were 20 years ago,” he explains.

Swan set out to integrate his hardware with his DAW that would keep up with the fast-paced, digital-centric environment of the contemporary music industry but also maintain the signal integrity of his gear. “For years, I would just add interface after interface so I could have every hardware unit on its own I/O from my DAW. But that meant I might have to send audio out into an EQ, back into the interface, out to a compressor, back in, and before you know it there would be upwards of four instances of conversion, especially if I was working on the master bus,” he says. His research into solutions with the right combination of features ultimately led to the flagship PATCH, a digitally controlled analog patchbay with 64 points of input and output and a powerful desktop app that allows instant saving and recalling of routings, as well as auditioning, multing and more at a click. “The moment I saw a video of Darren [Nakonechny, CEO and Founder] demonstrating the PATCH I knew this was what I’d been searching for,” he says.

Swan connected key hardware pieces from his rack–including much of the hardware he uses for master bus processing, as well as other often-reached-for EQ and Saturation devices–to his PATCH via its DB25 connectors. This allowed him to leverage the PATCH’s fully-recallable routing capabilities to not only speed up his mixing, but bolster his confidence in decision-making during the mix process. “The PATCH immediately revolutionized my workflow,” he says. “The flexibility to seamlessly switch from one piece of hardware to another or build a chain and to be able to recall that quickly without major drama is incredibly valuable. I now have several chains saved as presets that I can call up with a click and compare to each other. If I remember a certain chain worked really well on a vocal last time, I can switch it in really quickly, see if it works, and either way there’s no downtime and no loss of flow. That’s really important when you’re making critical creative decisions.” Swan recognizes that the speed and efficiency of the PATCH help him keep up with the music industry in a way that would not be possible with a conventional analog workflow. “I remember doing full console recalls,” he says. “The difference in workload between doing that versus clicking a button and having everything fully routed is night and day. It’s minimal and it’s fun, And that’s a great thing.”

Of all the connectivity the PATCH offers, Swan most appreciates the inclusion of a pair of front panel XLR ins and outs. “Being able to pick up a new piece of gear, plug it into those front inputs and outputs, and have it fully wired into my whole system is one of the greatest features,” he says. This convenient connectivity allows Swan to demo a new acquisition seamlessly. “I love hardware, so when something new comes in and I want to try it out I just plug it in on the XLR inputs and there’s no reaching behind racks,” he says. “Then I can let it sit on the desktop for a few days and play with it and decide whether or not I like it before finding a permanent home in the rack for it.” These readily-accessible inputs also allow Swan to fully integrate a piece a gear one of his clients brings to the space into his setup in a snap, or connect a mic for tracking. “The other day I was in the middle of a mix with an artist attending and she wanted to throw down a vocal really quickly. I plugged in a mic, went right into the front input of the PATCH, routed it into a 1073 and then into my interface in PATCH APP, and we were ready to track. “

As passionate as Swan is about the music he works on, he knows that his role is ultimately to serve his clients’ creative visions. “I would never profess to have a sound,” he says. “I’m always listening with the ears of the artist and producer. I look for where they’re taking things and try to expand in that direction. I think that’s one of my strengths. If I’ve got ideas to push the boundaries, that’s something I can always explore as an alternative pass.” With outboard hardware a key part of Swan’s ability to deliver on his sonic goals for his clients, Swan values the PATCH Series for its simplicity in serving his sonic vision even more than for its deep feature set. “I’m not someone who’s excited by complexity,” he says. “I’m excited by simplicity. So if the question is, ‘how quickly can I get from point A to point B?’ with the PATCH the answer is ‘very quickly.’ It’s pretty addictive.” The enhancements to his workflow since integrating the PATCH have been significant enough that Swan envisions incorporating more PATCH Series hardware into his rig, utilizing PATCH APP’s multiunit configuration capabilities to build a seamless PATCH ecosystem. ““The PATCH has made it possible for me to carry on working the way I love within the framework of the modern music industry,” he says. “Now that I see how well things are working, I’ll surely be picking up another PATCH or PATCH XT in the not-too-distant future. It’s just fantastic.”

Flock Audio Inc. is a pro audio manufacturer based in Kelowna, Canada, founded in 2017. The company is best known for its PATCH System Series, which is a Digitally controlled, 100% Analog Patch bay routing solution for professional audio environments. For more information on Flock Audio and its products, please visit the company website at http://www.flockaudio.com.